As an organizer and speaker of the inaugural PittAgile Gathering, I was excited about my session on Team Empowerment via Decision Delegation. It was part of the Leading Agility track, which focused on vision, values, empowerment and culture. It was great to be collaborating with fellow co-organizers Beth Davis, Jake Nichols, Jeff Pulcini and John Davis.

The session was co-presented with John Davis and we used a Training from the Back of the Room approach for the design. We wanted participants to engage and learn from one another, so we tried to step back and make space for thoughtful discussions. We kicked off the session by asking participants to find a partner from another table and connect with the topic by discussing what they knew about empowerment and delegation – the pros AND the cons. 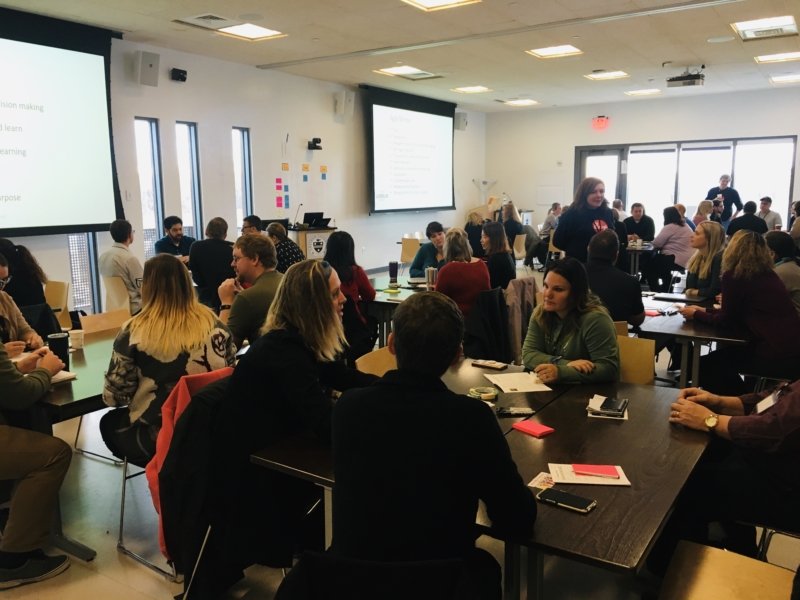 After sharing some quick concepts about leadership and the importance of delegation, we asked the group of 40ish to break into two camps – one worker camp and one manager camp. From there, they split into groups of six to discuss the following topics:

With this, we wanted to create empathy toward the worker-manager paradigm by helping people see another point of view. The space was full of conversation, and as the facilitator, the sound of engaged discussion made me smile as I walked around the room. 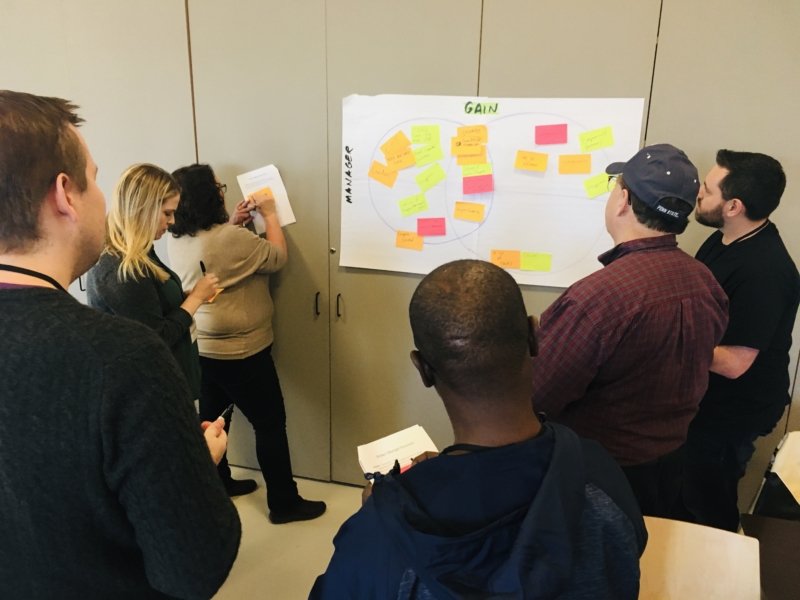 Next, we directed each group to their own Venn diagram that we had placed on the walls. They displayed “Managers Gain” and “Managers Lose” and “Workers Gain” and “Workers Lose” with the overlap in the middle. We asked attendees to jot down thoughts on stickies based on their previous discussions and populate the Venn diagram. The act of thinking through the discussion, putting pen to paper – or in this case, Sharpie to sticky – helped process the information and putting it on the flip chart made it visible.

Now, we had information radiators full of insights from managers and workers about the gains and losses of delegation. Powerful stuff. 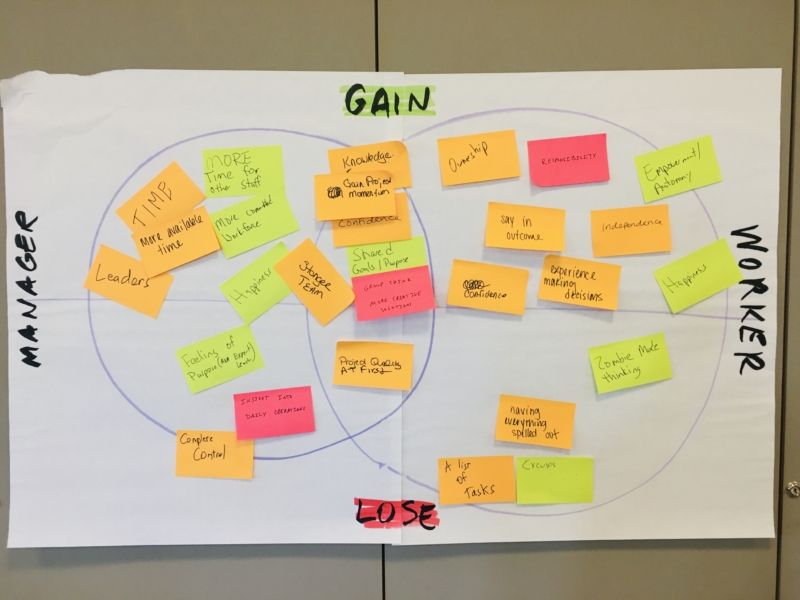 After a debrief on the Venn diagram exercise, we asked the manager and worker camps to cross the boundary and form mixed groups in order to share their perspectives and experiences for the rest of the session. Now that groups were mixed with workers and managers, John introduced Jurgen Appelo’s Delegation Poker.

If you’re not familiar with Delegation Poker, it is an exercise that helps people decide what level of delegation to use. The levels range from “Tell” (I will tell them) on one end of the spectrum to “Delegate” (I will fully delegate) on the other. There are five levels in between, with “Consult” (I will consult and then decide) and “Advise” (I will advise but they decide) near the middle. Teams consider a scenario and decide, through discussion, what level of delegation is appropriate. 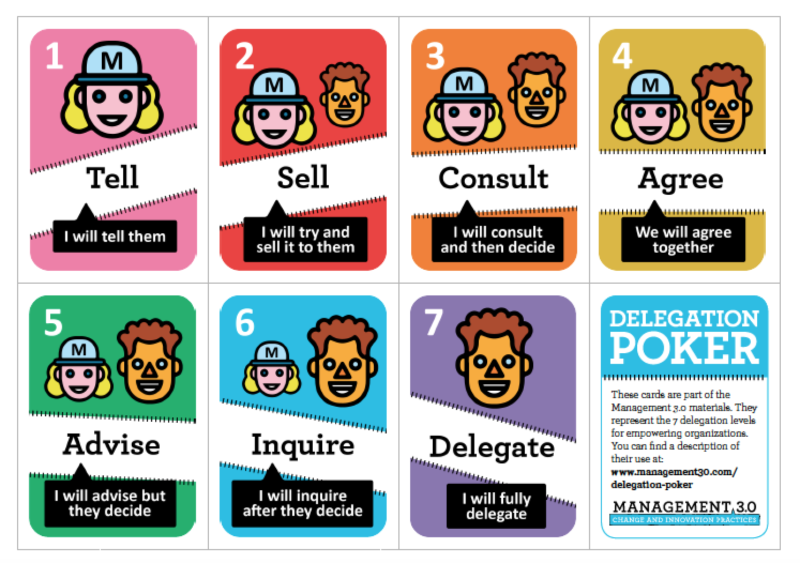 We handed out sheets of paper with various scenarios and asked the groups to play Delegation Poker. There is no “right” answer, so participants needed to discuss, convince, understand and agree. Examples of the scenarios dealt with hiring new team members, conflict management and moving desks to co-locate teams.

As I walked around the room, it was easy to tell that there were excellent discussions taking place. People were passionate and taking it seriously, yet they were loose and having fun. 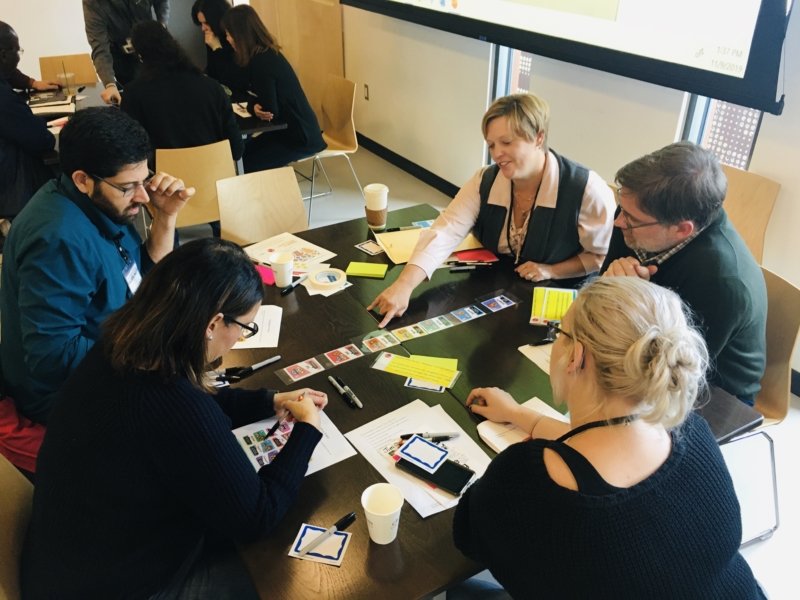 We were nearing our time box, so I asked participants to silently reflect in their handouts on two questions:

After the session, multiple people told me how much they enjoyed the exercises and open discussions. One person said that they “learned so many good leadership mental models” and another said “the Agile Leadership program was fantastic.” We had a great group and the session contributed to a successful Leading Agility track. I learned from the perspectives of the various participants and had a great time collaborating with the other organizers. I’m already looking forward to next year!

Were you at the PittAgile Gathering? How about the Leading Agility track? Any thoughts to share?