The Role of an Agile Manager

When leading training classes or coaching teams and organizations, I often hear the question “what is the role of a manager on an Agile team?”

It’s a very good question and there are quite a few misconceptions. To start exploring this topic, let’s begin with what a manager typically does in a traditional environment. We’ll use Jim – who manages a team – as an example.

How Do Managers Become Managers?

Now don’t get me wrong, I am not trying to imply that managers are incompetent or bad people. These situations and managerial approaches often stem from good intentions. Let’s see if Jim’s story sounds familiar to anyone…

Jim was great at his job – we’ll call him a Doer. So great, as a matter of fact, that he was promoted to Lead Doer. After excelling in his role as Lead Doer, he was again promoted, this time to Senior Doer. And due to his knowledge, skills, and continued excellence in doing, he was promoted yet again. This time he was promoted to Manager… something he knows nothing about. In addition to not knowing how to manage people, he’ll be expected to do it without any formal training. Jim is happy, but more than a little nervous…

If that sounds familiar, it’s because that is the classic corporate career path of an aspiring professional. It’s not really Jim’s fault.  He’s just doing what’ “he’s supposed to do.” It’s a step I’ve seen many friends and colleagues take. And I’ve seen those people take it hesitantly because they knew they’d be giving up what they loved most about work. But it’s a new challenge.

Unfortunately, it’s a challenge in which most new managers are not set up for success. This is because many new managers don’t receive training in management at all. If they do receive training, it is most likely in scientific management theory – also known as Taylorism – which has proven to be ineffective with knowledge workers.

Since Jim is now a manager, but hasn’t been trained to be a manager, he will instinctually work in his comfort zone. When he was a doer, he was very focused on output and priorities. His manager would tell him what to work and follow up to see how it was going. Therefore, that’s what Jim thinks he should do. Unfortunately, he is focused on the wrong issues. What needs to happen is that we flip the priorities on their head, and here’s why.

Let’s imagine that Jim took some leadership training, got some coaching and mentoring and understands how an Agile manager should behave…

Jim is kicking ass and taking names. He has a new outlook on what a manager should do. He now understands that what he was once busy managing – the output and priorities – aren’t the big challenges. The team can figure that out. His energy and focus are better spent tackling the messy issues of politics and structures and policies that get in the way of real change taking place. Where people used to say “that’s just the way things work around here,” Jim is breaking down barriers and helping to change the organization’s culture. 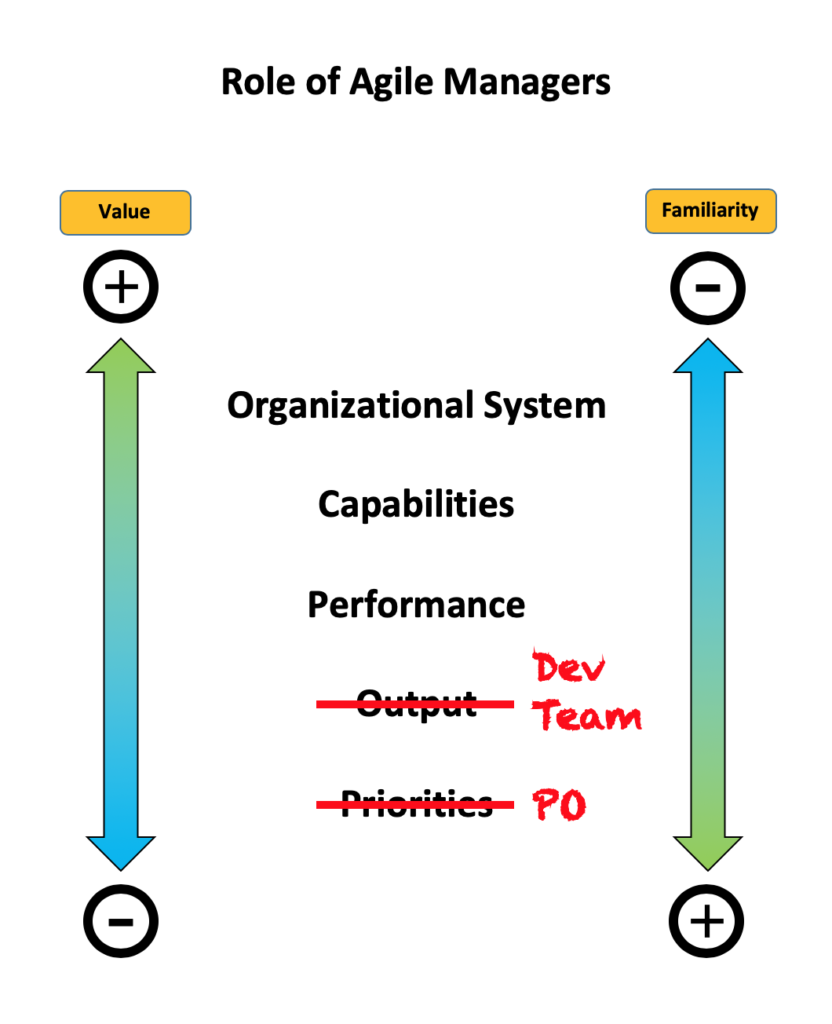 As you can see, the role of an Agile manager flips upside down the role of a traditional manager. Because the team is empowered to make their own decisions and trusted to get their work done, managers can focus on difficult issues that will lead to lasting and meaningful organizational change. Taking on those challenges requires skill, perseverance and fortitude.

It’s not easy, but someone’s gotta do it. And that someone is Jim, the Agile Manager.